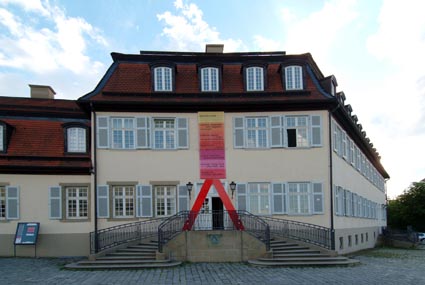 In many countries throughout the world today so-called residential art centers provide artists with material, organisational and spiritual support. The Akademie Schloss Solitude in Stuttgart is a relatively young institution (the first scholarship-holders moved into the building in 1990) and regards itself as part of this support system. It lays particular store by the fact that it is an international and inter-disciplinary cultural institution which brings together artistic production, theoretical reflection, and the public in novel ways.

The Akademie constitutes a meeting point for artists from the world´s various continents and cultures, as well as for representatives of different artistic fields and positions. At the Akademie they have the possibility of getting to know one another´s work and exchanging ideas and plans. The most obvious next step is the realisation of art projects, either jointly or individually.

Schloss Solitude attaches great importance to offering its guests the opportunity to experience their time in a different, qualitatively better way than that which the artists experience in the course of their everyday lives. The results of such a unique experience are seldom immediately visible, yet for the artists in question it can mean coming to a better knowledge of themselves. Thus over the past years Schloss Solitude has become a place where numerous artists establish new friendships, a place where elective affinities have come to the fore that can endure well beyond the time-period covered by the scholarship. For this reason, a period spent at the Akademie ought to be seen as an investment, though one which may perhaps not bear fruit until much later.

The Akademie Schloss Solitude is a foundation under public law. According to its statutes, its task is to promote mainly younger, particularly gifted artists by means of so-called residence scholarships, and by organising public performances, readings, concerts and exhibitions by its guests. Schloss Solitude is supported financially by the Land of Baden-Württemberg (from the proceeds of the German national lottery).

Scholarships are granted anew every 18 months. Not only artists can apply but also scholars and theoreticians in the respective disciplines (for example, musicology, art theory).

The wide-ranging programme of events organised each year by the Akademie (approx. 100 events, most of them public) is devoted exclusively to the works of the academy´s guests and scholarship-holders.

The scholarship includes the following:

Studios owned by Schloss Solitude are placed at the disposal of scholarship-holders free of charge and under the supervision of the technical director.

In view of the historical character and architectural substance of the building, as a rule the combined apartment/studios are only suitable for one person. In special cases the Akademie will consider allocating two units for families.

All artists invited to stay at Schloss Solitude are obliged to establish habitual residence in Stuttgart for the duration of the grant (compulsory registration).

Scholarships are awarded to artists who finished their basic studies not more than 5 years before applying to Schloss Solitude and who are not older than 35. Students currently enrolled at college will not be considered for selection. Several scholarships are also awarded regardless of the age of the applicant. It is possible to complete a project within the framework of the scholarship. Up to 90 six-month scholarships are allocated every 18 months. Akademie Schloss Solitude has 35 studios at its disposal for the use of the guests selected.

Scholarships are granted for either six or twelve months. In well-founded cases, it may even be possible to extend the duration of the scholarship.

Decisions on the allocation of the scholarships are made by the responsible specialist jurors (see below).

A knowledge of one of the following three languages is assumed: German, English or French.

Simultaneous applications for scholarships to the Kunststiftung Baden-Württemberg GmbH and to the Akademie Schloss Solitude are not permitted.

Applicants not selected in the current selection process can apply a maximum of two more times.

The independent jury consists of a jury chairperson and seven specialist jurors who allocate the scholarships for their respective fields independently. New jurors are nominated every 18 months.

The selections made by the specialist jurors are based on the quality of the work samples submitted by the applicants (slides of works of fine art, plans, sketches, models; books, manuscripts; audio-recordings and scores; video and film material; film scripts).

The scholarships are granted to artists and, as the case may be, to theoreticians in the fields of art and culture. There are no artistic conditions attached.

No one has a legal right to be awarded a scholarship. For this reason, the jury´s decisions are not justified to the applicants in writing, though the decisions are communicated in writing.