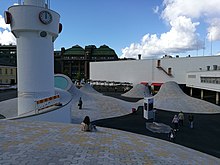 Amos Rex is an art museum named after publisher and arts patron Amos Anderson located in Lasipalatsi, Mannerheimintie, Helsinki. It opened in 2018 and rapidly reached international popularity, attracting more than 10,000 visitors in a matter of weeks.

In 2013, the museum announced plans to build a subterranean annex under the Lasipalatsi plaza, located near the museum’s premises on Yrjönkatu. The annex was estimated to cost 50 million euros and to also use facilities above the ground in the Lasipalatsi building. The Helsinki City Board decided to reserve the plot for the museum in December 2013. The funding was provided by the Finnish-Swedish arts foundation Konstsamfundet. The museum plan was unanimously approved by the Helsinki City Council in May 2014 and the new annex was scheduled to open in 2017.

The new annex was designed by JKMM Architects, whose other works include the Turku Main Library and the Finnish pavilion at the 2010 Shanghai World Expo.

The construction of the new museum started in January 2016[6] and it opened to the public in August 2018.